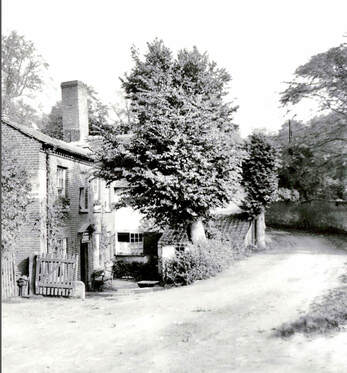 Inns named the Whalebone or Bladebone acquired their names because they had acquired bones from whales brought back by the seamen who went whaling in the 18th and 19th centuries.  These bones were either the straight 'tusk' of the Narwhale, or the curved jaw bones from the Greenland Right whale, which could be mounted to make a decorative arch.  In the case of the Whalebone Inn in Hereford they were the shoulder blades, hence the Inn was originally named the Bladebone Inn when it was built in the early 1800s.  (Ron Shoesmith quotes that in 1805 and 1811)  By 1826 the name was the Whalebone Inn, although the name changed back at various times.
The Whalebone Inn was located where the old coach road to Gloucester turns up Old Eign Hill.  Opposite this location is a lane, now marked as a Public Footpath which leads down to the River Wye where the Eign Brook joins the river.  To the left is the stone wall of Eign Wharf, which was mentioned in 1790.
​The end of the Inn
The Whalebone continued trading as a licenced Inn until 1956 when the Cheltenham & Hereford Breweries transferred the licence to the private house 'The Steppes' on the other side of Old Eign Hill and named the public house The Salmon Inn.  The Whalebone Inn then became the Whalebone Stores, but its trade was restricted by the C&H Breweries as there was a covenant on the Whalebone Stores not to trade as a licensed Victualler or sell beers, wines or spirits, or use as a club, or brew beer. This affected the trade as a corner shop, and the anglers then had to weigh their catch at The Brewers Arms just beyond the railway bridge.

After trading for 13 years, the Whalebone Stores was sold to Daniel Wright and his wife Angela Wright. The Wrights in 1972 built a house for themselves in the garden and sold the building to Mr Norman White who converted the premises into the Brookfield Veterinary Practice.

In 2006 Chris and Victoria Darke took over from Mr White on his retirement and in 2012 they decided to carry out major structural alterations to the premises. As the parking area on the Old Eign Hill side of the building was dug out the original entrance to the inn was uncovered.
At some point, probably in 1956, the pitched roof had been replaced by a flat roof when suitable waterproof roofing materials became available.  The area between the entrance and the roads had been filled in so that the building became single storied with a basement which suffered from damp, until Mr White had it damp proofed so that he could make better use of the rooms on the lower floor.
Details researched by Eleanor Atkin who became interested in family history when she inherited a large collection of family documents on the death of her parents. When she and her late husband purchased 95, Lichfield Avenue (the house built by Danny Wright in the garden of the Whalebone Inn), their solicitor passed on to them the deeds of the Inn and the house so that they could abstract any information which might interest them, before handing all the documents to HARC for safe keeping.
Powered by