EIGN SEWAGE TREATMENT WORKS AND THE HISTORY OF SEWAGE IN HEREFORD

You might be forgiven for wrinkling up your nose as you walk through Bartonsham and smell the sewage treatment works or as you catch a whiff of sewage when cycling across the Greenway.  Maybe you feel that the treatment works are rather close to the city but how good to know that this area has effectively “taken one for the Hereford team” for 165 years by giving a home to the Eign works.

By the 17th century Hereford was past its prime, it was poverty stricken and keeping the wells and pumps clean was impossible with residents, “emptying pissepots and other stinking excrements to ye greate annoyance of the neighbours”  There was little that the Council could do as living conditions became more squalid and a privy was shared between many houses usually just emptying into a cesspool, a boghole or the cellar.  You could pay the “night soil” man to empty it, at night between midnight and 6am, or just dig another hole.

Typhus, diarrhoea, smallpox and typhoid were common and life expectancy was short.  Luckily cholera did not reach the city in the mid 19th century but turned out to be the “best of all sanitary reformers”

In 1853 Thomas Rammell, inspector, conducted a 4 day inquiry in Hereford into sewerage, water, burial grounds and sanitary conditions.  Although chest diseases, TB and pneumonia, led to more deaths than infectious diseases no-one questioned them and the recommendations were based on sanitary conditions.  The inquiry found that: 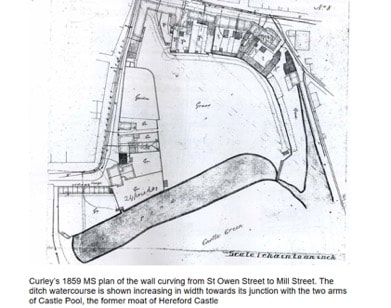 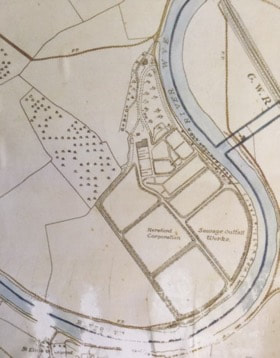 (1(The council did act quickly and in 1854 appointed Timothy Curley, civil engineer, to carry out the recommendations of the inquiry.  Curley's map and plans, including the drainage plan for the city, can be seen in the Town Hall behind the stairs.  He was very blunt:

“I witnessed such scenes of filth and uncleanliness in this city, as I did not before believe could exist in a civilised community..the floors of several privies being inundated by the semi-fluid contents of the cesspools; in some cases they are too filthy to be entered.”

Curley's plan included sewers to drain every house and with the ability to be extended, sewers to be self cleansing and with the outfall removed as far as was practical from the town with “manure tanks”for settling the solids.  Plenty of the city sewage, now drained from houses, was discharged into the Wye, it wasn't until 1970s that all discharging of untreated sewage was finally stopped.  Where was as far as practical from the town? Well that's where Bartonsham comes in, in 1885 work started on the sewage treatment works at Eign.
​Steam driven pumping plant
The layout of the site can be seen in the 1931 map of the ecclesiastical parish of St James, here.


After the Second World War work began on a new sewage works to serve a population of 50 000.  A complete photo record of the four year build from 1948 to 1952 is held at HARC (1) and provides evidence of some of the changes to the river that came about through the project:
Here is a link to our Stories tab > Places; for pictures of construction of the sewerage bridge between Bartonsham and Rotherwas. Posted by Angie Morris-Harman


(1) The Hereford Archive and Record Centre have three photo sources – a photograph of the sewage works before the post war works took place, two albums charting the progress of the build on the 1948 – 1952 project and aerial photos of the sewage works from 1952. 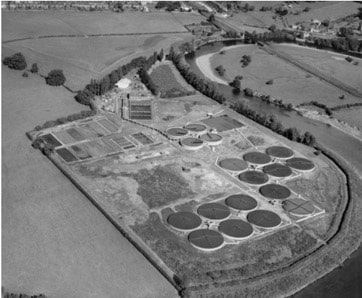 ​Sewage treatment works in Britain from Above 1952
https://britainfromabove.org.uk/en/image/EAW046838

Finally plans drawn up in 1963 proposed that future sewage and storm water needs be met by piping most of the dry weather sewage to a site in Rotherwas.  The work on the new plant and pipe line was started in 1978.

​
And  here is a picture of the flooded Wye from 2000 showing the upgraded works and the pipeline.


​1. Taking the wastewater away
When you flush the toilet or empty the sink, the wastewater goes down the drain and into a pipe, which takes it to a larger sewer pipe under the road.
The sewer then joins our network of other sewers and takes the wastewater to a sewage treatment works - sometimes it needs to be pumped there.
At the sewage works we put the wastewater through several cleaning processes so that it can be put back safely into rivers.

2. Screening
·    The first stage of cleaning the wastewater is to remove large objects that may block or damage equipment, or be unsightly if allowed back into the river. This includes items that should never have been put down the drain in the first place - such as nappies, face wipes, sanitary items and cotton buds - but often can be things like bricks, bottles and rags!
3. Primary treatment
The wastewater still contains organic solid matter - or human waste. The next stage is to seperate this from the water, and to do this, we put the wastewater into large settlement tanks, which causes the solids to sink to the bottom of the tank. We call these settled solids ‘sludge’.
In a circular tank, large arms, or scrapers, slowly move around the tank and push the sludge towards the centre where it is then pumped away for further treatment.
The water passes over a wall near the top of the tank and is taken to the next stage of the treatment process.

4. Secondary treatment
Although the visible bits of sludge have been removed, we have to ensure that the smaller and sometimes invisible nasty bugs are also taken out.
At our larger sewage treatment works, the wastewater is put into rectangular tanks called ‘aeration lanes’, where air is pumped into the wastewater. This encourages the good bacteria to break down the nasty bugs by eating them.The more they eat, the more they grow and multiply until all the nasty bugs have gone.


6. Sludge treatment
The sludge we collect at the start of the process is then treated and put to good use. Most of it is recycled to agricultural land for farmers to use as fertiliser, but we also use it to generate energy. We do this in three ways:
·    Combined heat and power - this process treats the sludge using a process called ‘anaerobic digestion’. This is where the sludge is heated to encourage the bacteria to eat it. This creates bio-gas that we then burn to create heat, which in turn creates electricity.
·    Gas to grid - we can also clean the bio-gas to a higher standard (known as biomethane) so that we can put it into the national gas grid to power homes, businesses and schools. 7. Back to the river
Now the wastewater is clean, it can be returned to local rivers and streams. In some areas, the water we put back into the river is very important as it helps to keep them healthy.
The quality of the cleaned wastewater is strictly regulated by the Environment Agency, and we test it to make sure that it meets high-quality standards.


…..but what about the withies?

We know that the withy or willow bed at the most southerly point of the bend belonged to the sewage works.  Here's the evidence, taken from previous research by the History group:

At their conference in May, and after their meatless meal at the Green Dragon and a visit to the city sewage works (much admired for its efficient system which included the growing of withies that were made, on the premises, into the corporation’s fruit baskets), (Institute of Sanitarly Engineers in a meeting with Hereford Council in 1918)
So far I have been unable to find out why the sewage works planted the withy bed.  Was it to filter the water that went back into the Wye, taking out the nitrogen?  The cleansing properties of reed beds have been known for centuries but the use of willow would appear to be a more modern phenomena.  Welsh Water are trying to find out on our behalf as are Hereford Nature Trust but neither have the answer yet.  The mystery continues.