We welcome comments and further information or recollections - please see comments at the bottom of the page. If you are giving information it's always good to have references where possible. 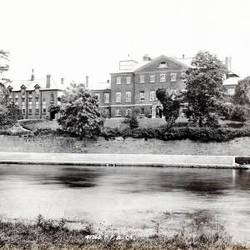 From: herefordshirehistory.org.uk
​The free hospital movement started in London in the 1720’s with the founding of Westminster and Guy’s hospitals. The model, which was developed and spread to provincial cities in the following decades, proved highly successful. At the core was a group of benefactors who were actively engaged in the running of the hospital. They appointed physicians, surgeons and apothecaries who worked mostly for free to treat the working poor for common illness and injuries. The pooling of knowledge encouraged best practice, accelerated the development of the medical profession and formalised practical training to supplement the theoretical knowledge that was being taught at the universities.

The foundation of a hospital, or Infirmary as it was called in Hereford, is very much the work of one man, the Reverend Doctor Thomas Talbot, rector of Ullingswick.  His first attempt to raise funds was in 1763 and, like his second try a year later, was largely ignored. However, in 1774 a lengthy appeal in the form of a sermon was made at the Mayor’s feast which was then printed in full in the Hereford Journal. Whether it was the eloquence, or length, of this sermon (it is rumoured that Samuel Johnson wrote it for Talbot) or the fact that Talbot committed £500 of his own money, it gained support from the local gentry including Viscount Bateman of Shobdon, George Cornewall of Moccas and Thomas Foley of Stoke Edith. Interest in the scheme, albeit a little slower, came from ordinary citizens who perhaps valued sitting on a management board with the nobility as much as pure altruism.

The first hospital was in a building at 162 Eign Street, now occupied by the New Chop Suey Bar. This building was soon outgrown and planning started for a larger purpose built building on land at Bartonsham donated by Edward Harley, Earl of Oxford. In 1781 Thomas Talbot laid the foundation stone and building was completed in 1783. The original building with later added wings still stands on the banks of the Wye and is best viewed from the Victoria Bridge.

By the time of its closure in 2002, the Infirmary occupied the land the length of Nelson Street and extended the back as far as St James church and the school. Opposite Bartonsham Stores is a development named Talbot Terrace, a tribute to the persistence of one of Hereford’s under recognised heroes. 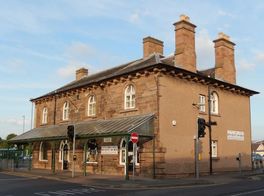 If the Hereford Infirmary is a visible monument to an almost neglected local figure, then the lunatic asylum, which has long since been demolished, was the creation of a more famous contemporary of Thomas Talbot. The Hereford Lunatic asylum which occupied the land on which Talbot Terrace is now built on; the architect was John Nash. Nash, who went on to be the starchitect of the Regency period, designed Regent’s Park and the Regent Street area, and was the architect of the interesting parts of Buckingham Palace, Brighton Pavilion, and numerous country mansions throughout England, Wales and Ireland.

Nash’s involvement in Hereford took place after unwise property speculation in London, which resulted in his bankruptcy in 1783. Lying low in Wales he restored his reputation by restoring the west end of St David’s Cathedral and building gaols. Moving eastward, he worked on a number of buildings in Herefordshire, including the Hereford lunatic asylum, which due the slowness in raising funds, was completed in 1799. By this time he had returned to London and was on his way to become the favoured architect to the Prince Regent, the future George IV. The asylum was closed in the 1830’s when the institution was relocated to a combined 3 county hospital in Abergavenny.

​Quality of construction was not one of Nash’s strengths and his building was demolished soon after it was vacated. Another notable work in Herefordshire, Stoke Edith Park, burnt down in 1927. The only local building of his that still stands is the robust gaol governor’s house that stands defiantly in the middle of the Hereford County bus station.