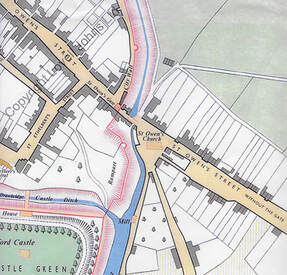 ​St Owens Church was destroyed in 1645 during the Civil War. The church was demolished on Monday 18th and Tuesday 19th August 1645 by the Scottish Army’s bombardment during the Siege of Hereford. (St Owens was one of two churches destroyed during the siege the other being St Martins south of the river. St Martins was later rebuilt.)
Charles Renton refers to St Owens churchyard in his book, The Story of Herefordshire Hospitals. He confirms that the churchyard was in use in the 1790s: initially patients who died in the Infirmary were taken to be buried in the Cathedral Close, but by the late 18th century burials officially ceased within the Close. From then on patients were either buried in the parish from which they came from, or if they were city parishioners, interred here in St Owens burial grounds. One grave stone remaining on the site is dated 1867. According to the 1888 Ordinance Survey (OS) map, the churchyard was still in use for burials, but by the 1904 OS map, the churchyard is marked as ‘disused’.
In the 1950s the site was used as a children’s play park, but by 1967 it was cleared and became part of the city ring road leaving the small green that you see today in front of Daws Road.  See Bert Daniels Story about the construction of the Ring Road

The destruction of St Owens church left St Giles Chapel as the only local place of worship until St James Church was built in Vicarage Road in 1865.
The former launderette, opposite, was the Pavilion Kinematic, a cinema, opened in 1919 and closed in 1926. It was formerly listed as the Salvation Army Barracks and earlier as the Primitive Methodist Chapel.
Return to Parish History Map