​The Meadows have been grazed by a milking herd at Bartonsham Farm, for as long as anyone can remember and for the past century by the Matthews’ family of Eaton Bishop. The land which is owned by the Church Commissioners, was leased to the Matthews in 1920 for three generations: John William, Thomas Stanley and John Edward, who now has the final tenancy.
An easy relationship between the Matthews family - particularly Stan and his son John - and local people ensured that the landscape, botanical and historical qualities of the Meadows were appreciated and cherished by generations of people living close to the centre of Hereford.  See Bartonsham Dairy
The fact Hereford still has a 120 acre working farm with its own dairy within a stone's throw of the City Walls is remarkable. It is thanks to the fact that, being in the flood plain, development for housing stopped abruptly at the Row Ditch, the scheduled ancient monument that marks the frontier of the City's growth reached by the 1850s. Beyond the ditch the land is low-lying and, with the exception of an area taken out of it by the Victorians for the Treatment Works, survived intact - complete with a rich archaeological legacy.
Historian David Whitehead:
Bartonsham and its meadows rank as one of the key elements in the city of Hereford’s history.
By the mid-13th century there was a *prebendal estate of Bartonsham, which was endowed with lands in the parish of St Owen. In 1866 these were transferred by Prebendary Hopton to the Church Commissioners for the endowment of the new church of St James. The extent of the estate is unknown – did it include Bartonsham Farm?
The creation of prebendal estates occurred after the Norman Conquest and it seems likely that Bartonsham had an earlier history quite distinct from the Cathedral.
The Cambridge Dictionary of English Place-Names (2004) states that ‘barton’ or in Old English beretun or baertun was ‘a corn farm, an outlying grange, a demesne farm, especially one retained for the lord’s use and not let to tenants.’ It also adds that the name implies a settlement which was originally a component of a larger unit. After 1066 this appears to be one of the many estates around the city of Hereford collectively forming the patrimony of the church. On the west side of the city there was another ‘barton’ remembered today as Barton Road.
At Bartonsham the arable lands that produced the corn, i.e. the barley, may have come from the present meadows, since the Wye was probably better mannered in the distant past. On the other hand, the arable lands may have been at the south- eastern end of the Port Fields, which surrounded the immediate hinterland of the early city. The suffix **ham or hamm can either be a generic name for ‘homestead’ or just as frequently, a water meadow
It seems Bartonsham was part of the ancient patrimony of Hereford’s earliest church; one that pre-dates the foundation of the cathedral and around which the royal liberty of Hereford - 4,820 acres today - was established, outside the later jurisdiction of the shire. Archaeological evidence shows that burials in the vicinity of the original church on Castle Green extended back to c.700 AD – and probably earlier since the excavations in the 1970s were never bottomed. Bartonsham was thus, the home farm of St Guthlac’s and also the royal palace – mentioned in Domesday Book - which the Mercian kings attached to it.
* Prebend, or Prebendary;
the stipend assigned by a cathedral or collegiate church to a canon or member of the chapter. The land, tithe, or other source of such a stipend.
** see name on map for Bartonshams Historic Mills link - 'Bartons Ham'
​The Bartonsham Meadows lie nestled in a bend of the Wye. As a flood plain it was, and is, regularly washed over by winter floods to emerge in spring enriched with a layer of fertile, riverine silt. Natural flooding puts the necessary nutrients in the ground for good grazing and hay at no cost.
But was it also a water meadow? Water meadows are, or were, carefully managed to maximise the benefits of a rich pasture, what one Grosmont farmer called his ‘butter meadows’. Skilled water ‘drowners’ were employed to create and manage the ridges, furrows and ditches that irrigated the meadows. This brought forward the grazing season and kept the grass growing during dry weather. 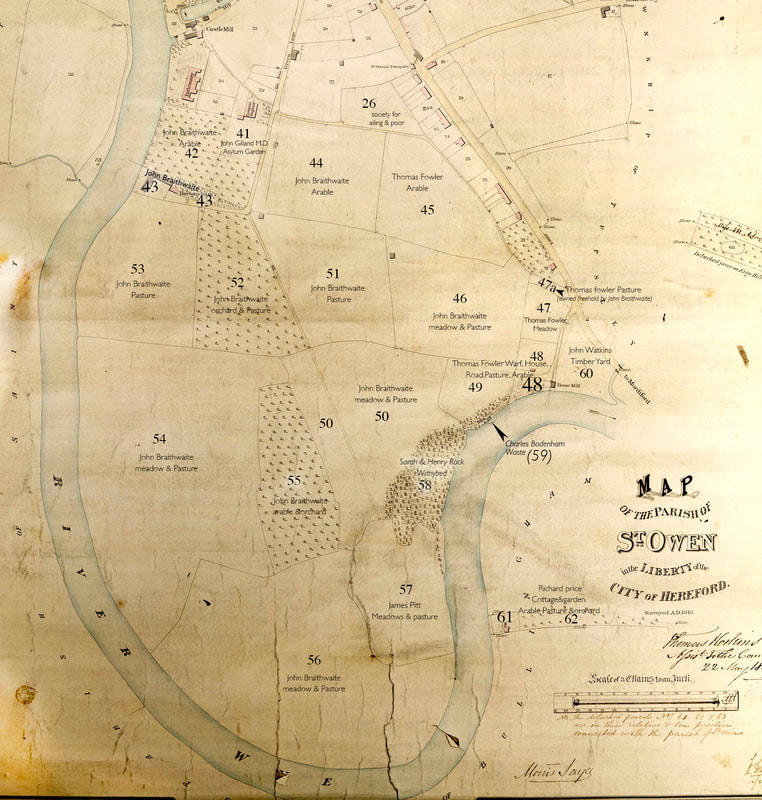 Research by landscape archaeologists suggest Bartonsham’s fields were managed as water meadows, the source of their floodwaters being linked to the milling industry
David Whitehead and David Lovelace:
Herefordshire Water Meadows
The extensive area of river-side pasture to the south-west of the city’s castle and cathedral, the Bartonsham Meadows, was separated from the arable lands of the city's Portfields by the Row Ditch, traditionally regarded as a military entrenchment.
Similar flood plains sometimes served as a functioning water meadow. A functioning water meadow, explains David Lovelace, required a controlled water course, often one provided by the waters emerging from a mill pond, the so called tail-leat. (There was a strong link between water meadows and mills – as at Lugg Mill). There is, as yet, no evidence to suggest the Bartonsham meadows were fed in this way.

More research is needed before any further evidence is destroyed.

Public Access to the Meadows
Locals have unto this day enjoyed walks around the meadows. Apart from the recently noted permissive path which rums along the course of the old Row Ditch, there have always been two public rights of way; one which was originally a bridleway from the end of Green street, and another which was a hard fought for path, running from the Castle Green to the Whalebone Inn at Eign Warf . The right of access to this route was often contested.
​In April 1862 The Hereford Times published this testimony from parishioner William Preece:
The newspaper described Preece as: “One of the oldest and most respectable of our fellow citizens; indeed we believe he is the father of the city”.

​The battle of rights of way along the river continued. Originally there had been a controversial footpath through the Infirmary gardens to the ‘Bassom’ Meadows and while some considered it detrimental to the patients’ health, others thought a good walk important for the citizens. As the old Castle Mill on Mill Street was to be demolished in 1881, there was much debate over the future of the land. Eventually it was decided to move the pathway from the Infirmary grounds to run over the demolished mill land alongside the river under a new infirmary wall. 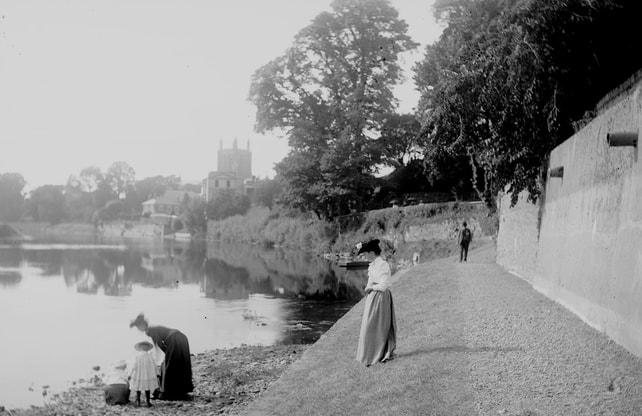